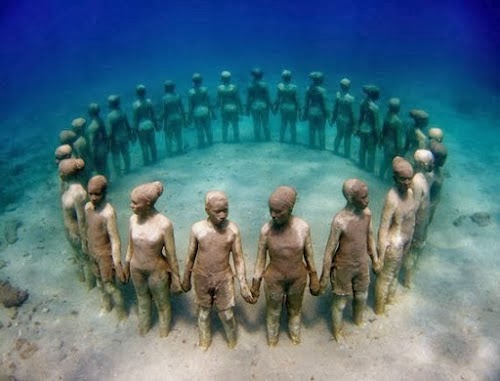 Did you know that after the abolition of the Slave Trade Bill was defeated by Parliament in 1790s, many people boycotted sugar to support the anti-slavery movement and over 300,000 people joined in. This boycott was repeated in the 1820s and 30s, when even more supporters refused to buy slave-grown sugar and stopped shopping at those shops that sold it. How many of us could give up sugar now? Surely even those who chose to give something up for Lent would struggle! Remarkably, Emma, one of our colleagues, is attempting to do just that, and is on day 12 of her quest.

This week, we went to see an outstanding performance of Benjamin Zephaniah's Refugee Boy, adapted for the stage by Lemn Sissay, our patron. It was a thought-provoking performance of an issue so often presented in a negative light by the modern media.

Thank you for your continued support. You can donate to the campaign here.

Main sculpture image taken from 'Adventures of Der Kosmonaut' blog, where it is described as follows: Underwater sculpture in Grenada, in honor of our African Ancestors who were thrown overboard the slave ships during the Middle Passage of the African Holocaust.
Posted by Unknown at 8:15 pm