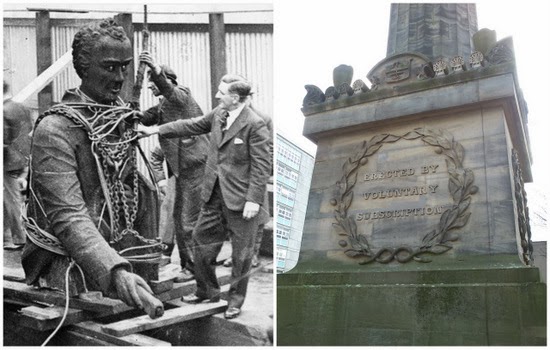 The foundations for the William Wilberforce Monument were laid on 1st August 1834, the same day as the abolition of slavery in the British Colonies. It is 102 feet high (31 metres) and now stands outside Hull College, near Queen’s Gardens. Amazingly, this giant was moved in 1935 from its original site at Queen Victoria Dock Square at the end of Whitefriargate, near City Hall, as it was considered to be a traffic hazard.

The monument was carved out of millstone grit and the statue itself stands 12 feet tall. On its base, it states that it was ‘erected by voluntary subscription’ to commemorate Hull’s world famous son. This was a remarkable feat as the cost of the original build cost the equivalent of an eye watering £90,500 in today's terms (£1,250 back then) and a century later, the cost to move it was £70,000 (£1,500 then) (Hull Museums Collections).

The move took four months and in the base a number of items were placed, including photographs and maps showing the old and new locations, descriptions of removal reasons and methods used to move the monument, a page from the Hull Times dated May 18th 1935, a Jubilee Crown (coin), a Wilberforce House Medal dated 1906, examples of coins from 1935 and a copy of the Hull Daily Mail and notes and booklets about Tarran Industries (a company instrumental in its move). Always philanthropic, even the scaffolding erected before and after the move was used as a means to raise funds for charity; the 2 shilling (20p) charge was useful in its raising of funds to the Mother Humber Fund, a children’s charity.

The public had a starring role in the creation and move of this symbol of emancipation and it is in this spirit that the public could honour the monument by lighting and restoring it.

Slavery, on a grand scale is in the past but its embers are ever present. Its horrors resurge periodically through the press with the exposure of acts of supreme cruelty. The monument is a tangible reminder of what can be done with determination and good conscience. It is with pride that Hull is linked to this symbolic reminder of the value of every human life.

Hull becomes the City of Culture in 2017 so let us make sure that Mr William Wilberforce is ready for the occasion. Please donate here for the restoration of the Wilberforce Monument.

Moving the Wilberforce Monument in 1935

A short clip about the Wilberforce monument: