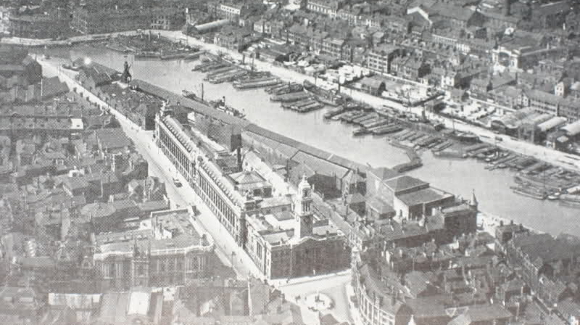 We have heard it said by an eminent historian that Hull was on the right side of the country when it came to issues of the slave trade, but that doesn’t quite explain the full story. Whilst not a key player in the slave trade in the way that other more notable ports were (such as the Atlantic-facing Bristol and Liverpool), Hull was indirectly involved in the supply of raw materials for the expanding Yorkshire textile industry - particularly wool. As well as this, Hull ensured that its cotton industry obtained cheap raw material and all the textile industries obtained huge quantities of dyes (such as indigo and logwood) and dye fixatives.


“The port of Hull became extremely important, for the export of West Riding raw wool and also, later, woollen and worsted cloth through the Aire – Calder navigation which connected the West Riding with the Humber before the development of the Leeds-Liverpool canal shifted trade west towards the port of Liverpool. The export of such goods to the Baltic States through Hull was reciprocated by the import of linseed, crushed in Hull for its oil, and vitally important materials for the Navy and for trading ships such as timber, hemp and large quantities of flax.  Such Baltic goods were also imported through Scarborough and Whitby - where ready use will have been made of the Baltic wood and the sails - eventually made from the imported flax - and ropes, from the imported hemp, in the construction of some of the slave ships there.”

Although tenuous in its links to Hull, what this history teaches us is that we can’t be complacent and even now as a port city we are likely to be unwittingly transporting products of slavery. This makes the recent piece of legislation (within the Modern Slavery Act 2015) that obliges transparency in any organisation’s supply chain more relevant. Whilst it will primarily affect organisations with a turnover of at least £36 million, others should take note and use this as part of their organisation’s own ethical footprint.

We’d like to say a huge thank you to our 23 runners in the RB Hull Marathon. They raised nearly £3,000 towards our target of £20,000 to light the Wilberforce Monument and bring the story of abolition back into prominence.

Our next fundraising event is coming soon. Please look out for the venue, date and time to be confirmed.....

Released this month is the Independent Anti-Slavery Commissioner’s Strategic Plan 2015-17 which is pivotal in how anti-slavery measures will be enacted
https://www.gov.uk/government/publications/independent-anti-slavery-commissioner-strategic-plan-2015-to-2017

A series of films by Unchosen which highlight modern slavery
http://www.unchosen-films.org/films/trailers-gallery/