A Lesson in History - Update 13th May 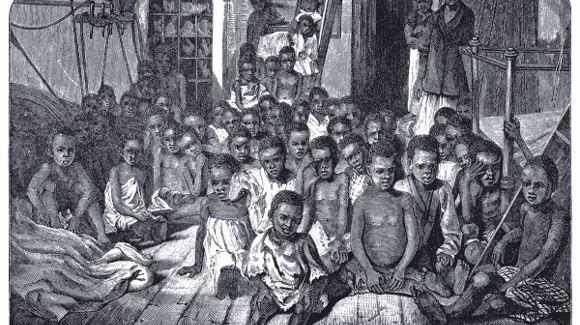 A Lesson in History

Ships then, boats now. The numbers lost to the scourge of human greed is truly horrific. There have been some recent high profile boat disasters involving migrants attempting to cross the Mediterranean. All the thousands of passengers were being smuggled - some were also being trafficked.

Human smuggling is not the same as human trafficking. This distinction was so eloquently made by a recent article by Klara Skrivankova, Head of Europe Programme at Anti-Slavery. Both are criminal acts and both are deplorable but they are not the same thing. Human trafficking (and therefore slavery) involves an element of coercion where someone is exploited through forced labour or prostitution. There are instances where one situation may overlap with another; it does not take much for someone who has been smuggled to become trafficked because of desperation or poverty. This is similar to someone who finds themselves having to flee from their home as a refugee or having to cope with the devastation reaped by mother nature. However, in order to address a person’s circumstances with a meaningful response, it serves us all well to not use terms such as people smuggling, people trafficking or refugees as interchangeable terms because they are not.

It is difficult to imagine what horrors lay beneath the waves when a reported 1,750 migrants died trying to cross the seas in the first four months this year. Compared to this time last year, this figure is said to be 30 times more. The single biggest loss of 700 migrants on 19th April came less than one month after Britain passed the modern slavery bill, and this illustrates the need for us to remain vigilant and not fall into the complacency of feeling that we have done something to combat the issue. Less than two weeks later over 7,000 migrants had to be rescued in another attempt at a perilous crossing.

These incidents show that changes in one nation’s domestic policy has an impact to a smaller or lesser degree on others, whether that has been self imposed or engineered by others. The ripples or seismic changes eventually reach us all, and this not necessarily easily contained within borders as the alteration of the status quo creates a climate of vulnerability. Without doubt there is a responsibility to look at cause and effect. Key points in history continue to have their own impact on the present, including the transatlantic slave trade, the Sykes-Picot divisions after WW1, and more recently the interventions in Libya and Iraq.

Do you know anybody who is running the Hull Marathon? We are continuing to build the marathon team for Wilberforce and raise the profile of slavery.

We have three teams all named after abolitionists: Thomas Clarkson, Olaudah Equiano and Kevin Bales. Our next team, Elizabeth Heyrick, is nearly complete. We would like to name a few more abolitionists so let us know if you know any more runners who want to join in. Sponsorships for the whole effort can be made on our Virgin Money Giving page.

The image shows a group of children who were rescued from a British slave ship (the Daphne) after Parliament abolished the slave trade. Credit: awesomestories.com. Read more here.
Posted by William Wilberforce Monument Fund at 8:51 pm