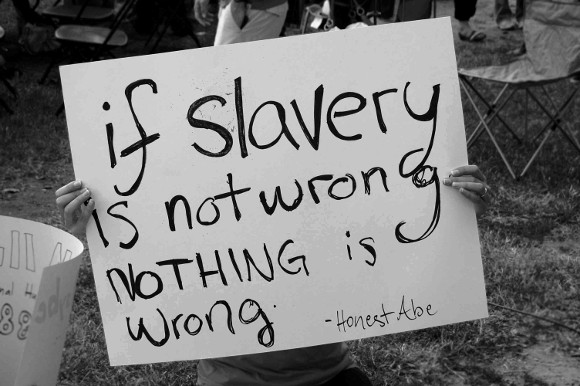 The Human Trafficking Foundation is one of several organisations that have revised the number of people involved in modern slavery in the UK from 13,000 to 20,000. But how is possible that the number is rising after the Modern Slavery Act came into force last year?

The reasons are complex. For example, the UK Government put out a host of modern slavery adverts over a year ago with the catchphrase “It’s closer than you think”. The statement is true, but a year ago is in the distant past for many people and without being frequently reinforced, the message is easily forgotten.

The point was that we, the public, have a key role to play as the eyes and ears of suspicious activity happening under our noses. Yet recent research undertaken by a team led by Dr David Walsh (University of Derby) and reported in a recent public lecture evidences that too often we do not know what to look out for, or understand the true nature of modern day slavery and trafficking.

This lack of awareness is also mirrored within the business world. Too often we do not perceive the most powerful factor of control - psychological coercion - as part of the story. We also have the perception that modern day slavery is something that happens abroad without the possibility of any aspect of it touching our lives, despite the official figures stating the contrary. We forget that as consumers, users of service industries and workers using secondary products that we are indeed part of the story.

Very soon, businesses with a turnover of more than £36m will be obliged to report annually on the health of their supply chain. But the quality of this reporting will vary from wilful ignorance or genuine lack of awareness of the need to conform to this part of the Act. Campaign organisations such as Kalayaan work to make the laws surrounding the employment of overseas domestic workers less open to exploitation. Many workers are currently tied to their employers through the need to have their passport visas fixed to the visa of the employer they came to the UK with, which makes them more vulnerable.

In addition to public ignorance and business negligence, crisis situations created by natural disasters can leave refugees of impoverished countries at greater risk of exploitation. For refugees, climate-caused disaster or foreign policies which bring war into their home nations, can enhance the problems caused by their low economic output, leaving the country more prone to modern day slavery.

So, fewer wars, better responses to natural disasters, less famine, greater corporate responsibility and fair pricing structures are just some of the responses needed to bring down the number of people affected by modern slavery from the 35 million worldwide. It may seem like big figures and small individuals, but many a drop make an ocean, and maybe it is time to consider what we can do as individuals.