The Dark Side of the Premier League Dream 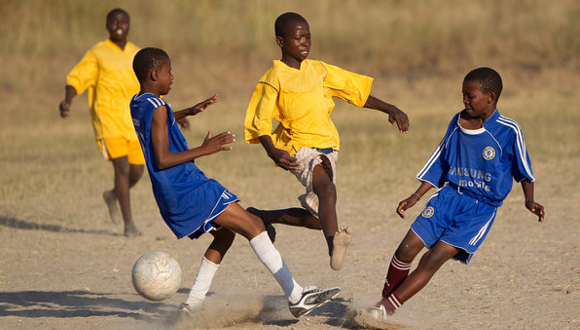 Look around Europe’s elite football leagues in 2016 and you will find young African players at the core of many top sides. Take the Premier League for instance; whether it is Kenyan midfield rock Victor Wanyama at Tottenham; Ivorian defensive talent Eric Bailly at Manchester United, or Nigerian sensation Kelechi Iheanacho at Manchester City, African stars are lighting up the competition and serving as aspirational figures to the millions back home. Their status embodies the European dream – not only in the sense of sporting achievement, but also in the elevated profile and monumental wealth that such a position promises. Every year, thousands of young Africans hope to pursue this dream. However, swooping over the horizon are vultures that unscrupulously eye the lucrative rewards of exploiting these hopes for financial benefit.

Take 16-year-old Luc for example. Promised a trial in Europe by an agent in exchange for £6,500, his parents borrowed the money in his native Cameroon from loan sharks. They hoped that their risk would pay off thousands of times over through their son signing for a European club. But on arrival, the so-called ‘agent’ disappeared, abandoning Luc in the middle of Paris.

Maurice, a 15-year-old from the Ivory Coast, was promised a trial in Switzerland for £2,500. After his father borrowed the money, the trial’s location changed to Thailand and after a few inconclusive trials, he too was abandoned.

Or how about Ben, a 16-year-old Cameroonian whose family raided their life savings for €3,000 to pay for a promised trial at Paris Saint-Germain? On arrival in Paris, his ‘agent’ made his excuses and abandoned him in a hotel in the French capital.

These stories are repeated thousands of times over. Deceitful agent offers glimpse of European dream to young footballer. Agent takes money from family of child and arranges travel. Child left thousands of miles from home, penniless, homeless, and often forced to turn to crime to survive. Meanwhile, the family, who often borrowed the money from local loan sharks, are left with crippling debts that they are unable to pay off.

Sometimes abandonment is only the start of the struggle. Al Bangura played in the Premier League for Watford after being promised a trial by an agent in Guinea. That wasn’t the agent’s real intention however; Al was initially brought into the UK to work in a male prostitution ring. He was lucky and escaped – many are not so fortunate.

In 2009, the United Nations reported that the riches of modern-day football had caused it to spawn its own modern-day slave trade. The lucrative nature of trafficking is increasing its popularity, even attracting those who previously would have focused on diamond and timber smuggling. As long as young boys have dreams of following in the footsteps of their football heroes, there are dreams for the vultures to feed from. But how has this been allowed to happen, and what is being done about it?

If we look at the governing body of world football, FIFA, for answers, we come up short. Their own integrity has been infamously challenged in recent years, and they deregulated the agent industry in April 2015 (link via The Conversation) making it easier for fake agents to slip through the net. Their legislation has been criticised as unfit for purpose by Ed Hawkins, author of The Lost Boys: Inside Football's Slave Trade. FIFA’s Article 19 states that clubs cannot sign players under the age of 18, but Hawkins criticises its caveats, stating, “it's not worth the paper it's written on, it's just for window dressing by FIFA, they have given get out clause for clubs to do what they like.”

But FIFA cannot be criticised alone. Migration expert James Esson says “this [human trafficking] is a political hot potato for Fifa... in their defence it is a crime that goes beyond their control.” Concerted pressure is necessary from governments in the territories where these crimes are being committed. Immigration departments need to be vigilant when assessing African children travelling to Europe, and there has been a lack of focus in this area. "For governments and FAs in the region, the trafficking of young players is not a priority... the victims become lost individuals, who nobody wants to do anything about," said Jake Marsh of the International Centre for Sport Security.

The only charity set up to combat the growing issue of human trafficking in football is Foot Solidaire. An organisation set up by Jean-Claude Mbvoumin (a former Cameroon international), Foot Solidaire has helped many young Africans caught in the trafficking trap, including some of the boys mentioned above. They have protested that the scale of trafficking is beyond them and their limited funding, and that more needs to be done by governing bodies.

When Hawkins’ research is applied to Foot Solidaire however, the problem becomes more complex. In research for The Lost Boys, Hawkins was contacted by 20-year-old Japanese footballer and associate of Foot Solidaire, Shinji, who had made payments to an agent for trials that never materialised. It transpired that Mbvoumin was the agent in question, thus implicating the only anti-football trafficking charity in the very practices that it was fighting against.

Furthermore, doubts over the authenticity of victims’ stories makes helping them more difficult. In 2001, Belgian senator Jean-Marie Dedecker brought a case of 442 Nigerians working as football slaves in Belgium in 2001 but failed to yield a single prosecution. However, as a result of the case, the state announced that such trafficking victims could receive benefits. This led to a marked increase in trafficking claims from African boys in Belgium. Solange Cluydts, head of leading anti-human trafficking charity Payoke, called the claims (including those from Foot Solidaire) “bullshit”.

So what is the truth? Well, whilst some of the stories may be exaggerated, the research of Hawkins and others illustrates that the issue of human trafficking through football is clearly a major, growing issue with a rising number of victims. Hawkins notes the story of Jay-Jay, a 17-year-old from Guinea, who was trafficked into slavery and abused by the very “scout” who he paid to help him. Such stories, and those of families back in Africa indebted to loan sharks, are becoming more and more common. Further co-operation between law enforcement, governing bodies, football associations, clubs, agents and FIFPro (the players’ union) is needed. And, as The Conversation suggests, education programmes and awareness campaigns are needed across Africa to protect children and young people from the perils of duplicitous agents with persuasive tales of the European Promised Land.

With the likes of Wanyama and Bailly so integral to the footballing elite, surely it is in the best interests of clubs to combat this issue from a sporting perspective as well as a humanitarian one. Parties across society must work together to ensure that more African footballers ply their trade on the pitch rather than in desperate servitude.